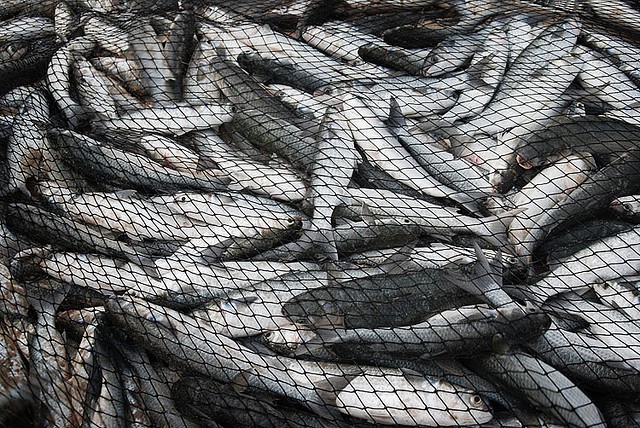 Afterwards Jesus appeared again to his disciples, by the Sea of Galilee. It happened this way: 2 Simon Peter, Thomas (also known as Didymus), Nathanael from Cana in Galilee, the sons of Zebedee, and two other disciples were together. 3 ‘I’m going out to fish,’ Simon Peter told them, and they said, ‘We’ll go with you.’ So they went out and got into the boat, but that night they caught nothing.

4 Early in the morning, Jesus stood on the shore, but the disciples did not realise that it was Jesus.

5 He called out to them, ‘Friends, haven’t you any fish?’

6 He said, ‘Throw your net on the right side of the boat and you will find some.’When they did, they were unable to haul the net in because of the large number of fish.

7 Then the disciple whom Jesus loved said to Peter, ‘It is the Lord!’ As soon as Simon Peter heard him say, ‘It is the Lord,’ he wrapped his outer garment round him (for he had taken it off) and jumped into the water. 8 The other disciples followed in the boat, towing the net full of fish, for they were not far from shore, about a hundred metres. 9 When they landed, they saw a fire of burning coals there with fish on it, and some bread.

10 Jesus said to them, ‘Bring some of the fish you have just caught.’ 11 So Simon Peter climbed back into the boat and dragged the net ashore. It was full of large fish, 153, but even with so many the net was not torn. 12 Jesus said to them, ‘Come and have breakfast.’ None of the disciples dared ask him, ‘Who are you?’ They knew it was the Lord. 13 Jesus came, took the bread and gave it to them, and did the same with the fish. 14 This was now the third time Jesus appeared to his disciples after he was raised from the dead.

15 When they had finished eating, Jesus said to Simon Peter, ‘Simon son of John, do you love me more than these?’

He answered, ‘Yes, Lord, you know that I love you.’

Peter was hurt because Jesus asked him the third time, ‘Do you love me?’ He said, ‘Lord, you know all things; you know that I love you.’

Jesus said, ‘Feed my sheep. 18 Very truly I tell you, when you were younger you dressed yourself and went where you wanted; but when you are old you will stretch out your hands, and someone else will dress you and lead you where you do not want to go.’ 19 Jesus said this to indicate the kind of death by which Peter would glorify God. Then he said to him, ‘Follow me!’

20 Peter turned and saw that the disciple whom Jesus loved was following them. (This was the one who had leaned back against Jesus at the supper and had said, ‘Lord, who is going to betray you?’) 21 When Peter saw him, he asked, ‘Lord, what about him?’

24 This is the disciple who testifies to these things and who wrote them down. We know that his testimony is true.

25 Jesus did many other things as well. If every one of them were written down, I suppose that even the whole world would not have room for the books that would be written.

This spiritual guided meditation is from Simon Peter’s perspective.

The last few years might have been extraordinary but the last few weeks have been bone-rattling singular in every way. During that last week in Jerusalem with Jesus, we were tossed to the highest heights when we entered Jerusalem in triumph, only to be cast to the lowest depths when Jesus was crucified. All of us have had to deal with the failure of deserting Jesus in the Garden of Gethsemane but I didn’t just run away – I disowned Jesus three times, even after he warned me I would[1]. But then he came to us, alive again from the dead[2], on the Sunday and then again, a week later[3]. We made our way back home to Galilee, where it all began, but what does the future hold? None of us knows, and while Jesus has spoken words of ‘Peace’[4], what will he say to me? Have I stuffed it completely? How could I have disowned him, not once but three times?

A few of us were staying at my place in Capernaum, waiting for a word from Jesus but my hands were as restless as my heart and when I said I was going fishing, the others said they would come as well. It was like old times, sailing, casting out the nets and rowing while we took turns hauling in empty net after empty net. Sometimes I think I’m about as gifted at catching fish as I am catching men!

It was in the early spring dawn, with just enough light to see shapes and some colours on the shore close to us, when suddenly a solitary figure on shore called out and asked if we had caught anything. Then he told us to throw our net onto the right side of the boat. A whole school of fish swam into our nets and I thought, ‘this has all happened before’[5]; when Jesus first called us to follow him.

John put into words what my heart hoped, ‘It’s the Lord’. I leapt overboard into the cold water and waded to shore. There was Jesus with a fire of burning coals and one more time I thought, ‘this has all happened before’. The last time I was cold and there was a fire of burning coals was in the High Priests courtyard when I disowned Jesus. Joy and sorrow competed within me and in the end bewilderment won.

When the others got to shore Jesus treated us to a bread and fish breakfast and when we had finished he called me aside. My heart sank. This is it. Yes, Jesus could pronounce the word ‘peace’ but how can you undo desertion and a three-fold denial. I hadn’t been faithful to Jesus before men[6] so what would he do to me now. The others might be alright, but not me – I had crossed a line.

Three times Jesus addressed me as ‘Simon son of John[7]’, and asked me the same question. Three times he asked ‘Do you love me?’, and three times I answered the same way, ‘You know I love you.’ When he asked the third time, it hurt me deeply. In his own deft and loving way, he was doing ‘heart surgery’ on me, the third ‘cut’ was the deepest and opened the festering wound of my guilty failure but then cleansed it and put it back together with love and grace. He didn’t just reinstate me, he gave me a new job description. I was no longer to be a fisher of men, I was now a shepherd of his lambs and sheep, a carer and feeder of Jesus’ followers.

This is the fruit of Jesus crucifixion and resurrection. Jesus isn’t only the Lamb of God who takes away the sin of the world,[8] he is the Lamb of God who takes away my sin and renews me and cleanses me. This is the great miracle that flows from the death and resurrection of Messiah Jesus and I am a living testimony to how long and high and deep is the love of Christ[9].

[7] The Hebrew meaning of ‘John’ is appropriately, ‘YHWH is gracious’.